The RES is a Unique Scientific and Technical Infrastructure (ICTS) distributed throughout Spain, which aims to support the development of top-quality cutting-edge research. In 2018, the RES comprises 13 supercomputers and 12 institutions, and it is coordinated by the Barcelona Supercomputing Center – Centro Nacional de Supercomputación (BSC-CNS).

The following map shows the geographical setting of the different nodes in 2018. 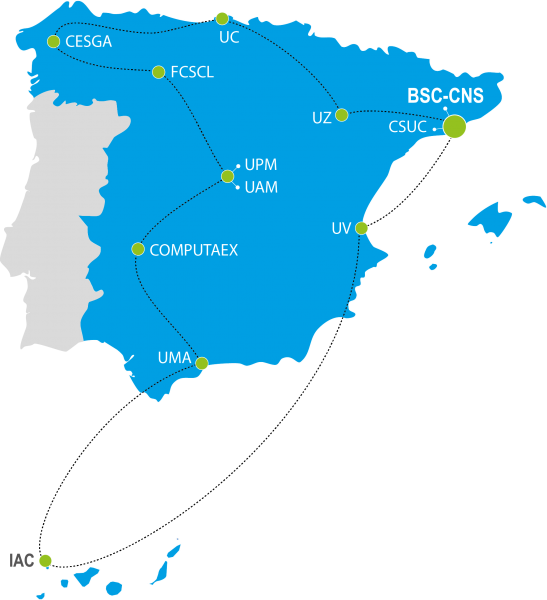 During 2018, the racks that were part of Mare Nostrum 3 (MN3) were successfully installed at the different nodes of the network. Each node adapted the facility to the new distributed infrastructure, while maintaining the full operational mode. The computing capacity has reached more than 28 million PFlops during the third period of 2018.

A video shows the substitution of MN3 with the new MN4, providing the racks for the RES nodes.

During 2018, the RES allocated 323.913,06 thousand hours to scientific activities proposed by researchers from the different scientific fields. 575 activities applied to the three access periods over the year. The overall success rate of the RES applications is 57%. The distribution of allocated hours among the scientific fields matches the distribution of the requested CPU hours, meaning there is not any bias in the selection process.

However, since each discipline has different processing needs, the distribution of requested activities shows a better estimate of the number of research groups in each field, being Physics and Chemistry the most common.

Due to the increase of BSC’s percentage of Mare Nostrum offering resources to the RES (up to 28% of MareNostrum 4), the allocated hours have shown an important raise to around 140  million hours per period.

During 2018, more than 120 scientific papers were published in the most prestigious journals of the different disciplines. They can be searched in the Publications area of the RES website. Overall, 3883 different international scientists have authored these papers. This high number is due to the many authors that sign astronomy papers.

Five scientific seminars were carried out during 2018. Information about program and speakers can be found in the RES website.

A number of training and technical sessions have been held during 2018. Check the list of events during 2018 in the link.

The RES was recognized as Unique Scientific and Technical Infrastructure (ICTS) and appeared at the ICTS Map, as a distributed network, an eScience infrastructure together with RedIRIS.

The RES was also awarded with the Excellent Network project 2015-17, as an extension for the year 2018.