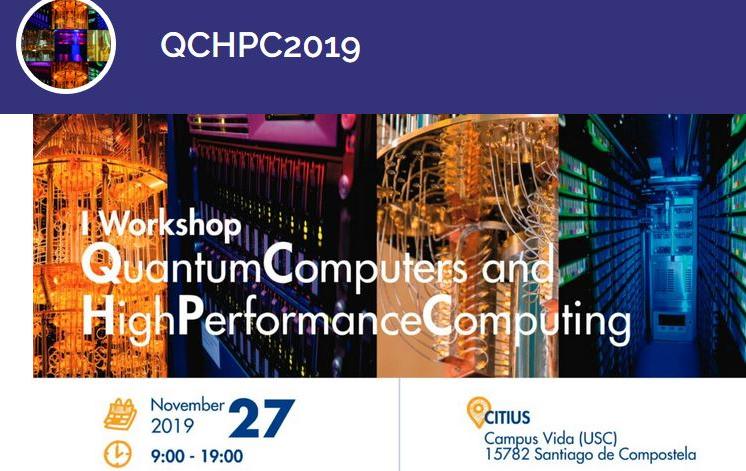 Seminario científico
-
27 Nov 2019
-
Santiago de Compostela
Quantum Computation has emerged as a new paradigm to solve certain problems that are beyond reach for conventional programming. Although still at its dawn, possible fields of application have been identified and tackled with promising results.

This workshop focusses on the relations between Quantum Computation (QC) and High Performance Computing (HPC) and the synergies that may appear between them for use in the scientific and technical fields. In addition, it aims at the creation of a scientific community involved in the development of Quantum Computing Technologies, both in its instrumental (hardware) and programming (software) aspects.

QC has emerged as a new paradigm to solve certain problems that are beyond reach for conventional programming. Although still at its dawn, possible fields of application have been identified and tackled with promising results. These are problems where computational complexity grows exponentially: molecular chemistry, condensed matter, artificial intelligence, data analysis, optimization and control, analysis of financial markets, logistics, medicine, etc. At the hardware level, quantum processors (or QPUs) are expected to be added as accelerators similar to GPUs or FPGAs to classic supercomputers, thus executing hybrid algorithms such as those recently developed based on variational problems (Variational Quantum Eigensolver, Variational Factoring, or Quantum Machine Learning).

On the other hand, before real quantum computers are built, classical emulation using HPC is a valuable method for efficient simulation and simplification of quantum algorithms. These simulators need access to a large amount of RAM and processors to allow a minimum capacity to study the effectiveness of the algorithms that will later be implemented on quantum computers.

This day seeks to connect researchers who demand this type of solutions with researchers and computer technicians who can contribute their knowledge for a better advance of the new methods described above. We would also like to profit the initiative to give visibility to the (in some cases incipient) research that is being undertaken in Galicia in the realm of QC and Quantum Information.

Quantum Computing is in an accelerated phase, getting strong support from hardware manufacturers (such as Intel, Google, IBM, Rigetti, D-Wave, Bull, etc.) as well as software developers (ProjectQ, …). The European Commission has selected QC as one of the main pillars of the Quantum Flagship, having started two quantum processor development projects, one based on trapped ion technologies and the second on superconducting qubits, where Spanish researchers participate. Also at national level there is already an initiative to manufacture quantum processors led by the company Qilimanjaro (BSC and University of Barcelona).