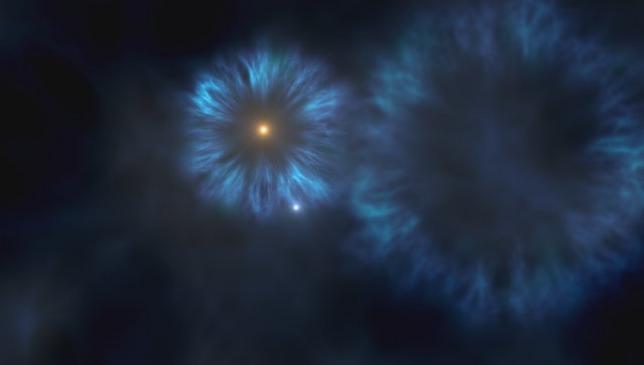 (Via IAC) Researchers at the Instituto de Astrofísica de Canarias (IAC) have identified, using the Gran Telescopio de Canarias (GTC) one of the first stars formed in the Milky Way, which is a key to the formation of the first chemical elements in the Galaxy. The calculations needed to carry out this study were executed in the RES supercomputer LaPalma. The results of this research were published in the scientific journal The Astrophysical Journal Letters.

The study presents the discovery of one of the stars with the least content of “metals” (heavy elements) known. The star is at 7,500 light years from Earth, in the halo of the Milky Way, and is along the line of sight to the constellation of the Lynx. The star is still on the Main Sequence, the stage at which most stars spend the major part of their lives. The source of energy of these stars is, as always, the fusion of hydrogen in their cores, and their surface temperatures and luminosities are almost constant with time. Another of its properties is its low mass, around 0.7 times the mass of the Sun, although it has the surface temperature 400 degrees hotter.

This discovery was made using spectroscopic images obtained with OSIRIS (Optical System for Imaging and low-intermediate-Resolution Integrated Spectoscopy) on the Gran Telescopio Canarias (GTC), at the Roque de los Muchachos Observatory (Garafía, La Palma). Spectroscopy allows us to decompose the light of celestial objects to study their physical and chemical properties, and thanks to this we know that J0815+4729 has only a millionth part of the calcium and iron that the Sun contains, but it has a comparatively huge content of carbon (almost 15% of the solar abundance).

“We  know of only a few stars (which can be counted on the fingers of a hand) of this type in the halo, where the oldest and most metal-poor stars in our Galaxy are found”, explains David Aguado, an FPI-SO (Severo Ochoa-Training of Research Personnel) research student at the IAC and the University of La Laguna (ULL) who is the first author of the article.

“Theory predicts that these stars could form just after and using material from the first supernovae, whose progenitors were the first massive stars in the Galaxy, around 300 million years after the Big Bang” says Jonay González Hernández, a Ramon y Cajal researcher at the IAC and one of the authors of the work. “In spite of its age, and of its distance away from us, we can still observe it”, he adds.

In fact, this star was first identified from the SDASS (Sloan Digital Sky Survey) database within the BOSS (Baryon Oscillation Spectroscopic Survey) project, and it was later observed with the ISIS intermediate dispersion spectrograph on the William Herschel Telescope (WHT) of the Isaac Newton Group of Telescopes, which is also at the Roque de los Muchachos Observatory.

“This star was tucked away in the database of the BOSS project, among a million stellar spectra which we have analysed to identify it, which required a considerable observational and computational effort” stated Carlos Allende Prieto, another IAC researcher, and a coauthor of this article. “It needs high resolution spectroscopy on large telescopes to try to detect the various chemical elements in the star which can help us to understand the first supernovae and their progenitors”, he emphasized.

In the near future, the HORS high-resolution spectrograph, currently in a trial phase on the GTC, will be a key instrument for the chemical analysis of weak stars such as J0815+4729

Rafael Rebolo, IAC Director and a coauthor of the paper, explains: “Detecting lithium gives us crucial information related to Big Bang nucleosynthesis. We are working on a spectrograph of high resolution and wide spectral range in order to be able to measure (among other things) the detailed chemical composition of stars with unique properties such as J0815+4719”.

The Observatories of the Instituto de Astrofísica de Canarias (IAC), the Gran Telescopio CANARIAS (GTC) and the Spanish Supercomputing Network (RES) are part of the map of Unique Scientific and Technical (ICTS) of Spain.

Image: artistic representation of the explosion of the first massive stars that formed in the Milky Way. The star J0815 + 4729 was formed from the material ejected by these first supernovas. Credit: Gabriel Pérez, SMM (IAC).