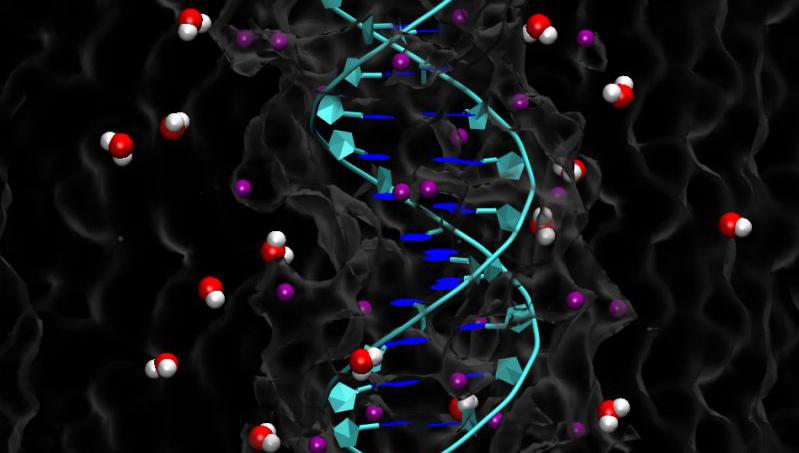 (Via CNB-CSIC) A study published in the journal PNAS describes what happens at the atomic level when a double-stranded nucleic acid molecule is stretched. Using computer simulation, scientists found a way to explain why DNA coils when it is stretched, whereas double-stranded RNA unwinds.

If a DNA molecule is stretched, it will coil up on itself. If the same is done with an RNA double helix, it will unwind. Why do they behave so differently although they have such similar structures? This is the question answered by scientists from the Centro Nacional de Biotecnología of the CSIC (CNB-CSIC) and the Institute of Physics of Condensed Matter at the Autonomous University of Madrid (IFIMAC-UAM) in their latest study, published in the journal Proceedings of the National Academy of Sciences USA.

In the words of the researchers, "These are two very similar molecules, but they behave in a totally different way when force is applied. A simulation of this process with supercomputers and millions of hours of calculation has allowed us to hold a magnifying glass to the atomic structure of these two molecules to understand why they behave so differently." The researchers have performed the simulations in MinoTauro, one of the Spanish Supercomputing Network (RES) supercomputers.

Inside the cell, nucleic acids are almost never completely relaxed. "Neither DNA nor RNA are those perfect linear structures the books show us.” To carry out their biological function correctly they are subjected to twisting, torsion, stretching, and other very specific physical forces," explains Alberto Marín, a CNB-CSIC scientist and co-author of the paper. As a result of these forces, local changes take place in the structure of the molecule, which facilitate or impede the binding of certain proteins to specific nucleic acid sites. In this way, they regulate many essential processes for the life of the cell.

Biophysical experiments had already shown that these two molecules, almost identical to each other, behave differently when force is applied to them. As would be expected, when an RNA double helix is stretched, the molecule unwinds and lengthens. The behavior of the DNA double helix is contrary to what intuition dictates, however, since the degree of coiling onto itself increases when it is stretched.

This study allowed scientists to see, for the first time, how the atoms of nucleic acids change position by applying a stretching force on them. "Computer simulation explains the distinct behaviour of the two molecules," says Guilherme Vilhena, a researcher at the CNB-CSIC, another of the study's authors.

The results indicate that when DNA is stretched, the distance between the two strands of the double helix decreases, making the molecule narrower. In the case of the RNA double helix, this distance hardly varies. "If the distance between the strands is reduced, as in DNA, it can be understood that stretching causes supercoiling. Maintaining a fixed separation between the two strands of a double helix (as in RNA) necessarily requires that the molecule unwind when stretched, "explains CNB-CSIC scientist Fernando Moreno.

For this study, one of the most powerful computers in the country was needed. The MinoTauro belongs to the Spanish Supercomputing Network (RES in its Spanish initials). "The development of a new simulation methodology to determine the mechanical response and millions of hours of work by this machine allowed us to perform this simulation," says Rubén Pérez, UAM researcher.

According to the authors, the atomic model derived from their research suggests that this apparently counterintuitive DNA behaviour –to coil when stretched– is ultimately linked to the small but fundamental difference that distinguishes it from RNA: the lack of a hydroxyl group.

Explaining the mechanical response of these two molecules at the atomic level can help to understand their function in greater depth. "These computer simulations can be a very powerful tool to reveal changes in biological function associated with structural changes," the authors conclude.