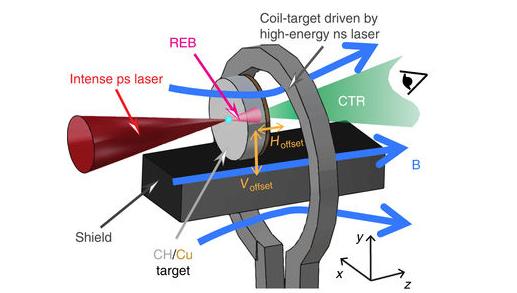 Efficient energy transport in dense matter by laser-driven relativistic electron beams is crucial in many applications including the study of warm dense matter, inertial confinement fusion, and ion acceleration by laser. A recent research, which counted with the participation of the RES user Javier Honrubia (ETSIAE-UPM), demonstrates the relativistic electron beam transporting efficiently its energy in dense plasma with an externally imposed strong magnetic field. The work, published in Nature Communications on 9th January 2018, is the result of an international collaboration involving researchers from University of Bordeaux, University of Osaka, Polytechnic University of Madrid, Ecole Polytechnique, University of Oxford, University of York and Technical University of Darmstadt.

The experiment uses a novel technique entirely based on the laser-plasma interactions to deliver extremely strong magnetic pulses (above 500 Tesla). This technique has been developed recently within the research consortium mentioned above and was successfully applied to achieve a five-fold improvement on the energy flux transmitted into depths of solid matter by beams of laser-driven relativistic electrons. The efficiency of energy transport is a challenge for the front-end research of many areas such as: 1) matter at extreme conditions similar to those found in the stars or in the planets interior, 2) controlling thermonuclear fusion reactions on a laboratory scale and 3) improving the sources of high energy particles and radiation for applications in fundamental science, industry and medicine. The experiment mentioned above is the first evidence that it is possible within a time as short as a nanosecond to produce a strong magnetic field, to diffuse it within the target, and then to propagate an intense electron beam through the magnetized material. The success of that experiment is a necessary condition for many prospective studies of magnetized high energy-density matter and also a proof of generation of ultra-high intensity energy flows in dense matter.

Full simulations of the experiment, from the diffusion of the magnetic field in the target to the three-dimensional transport of the relativistic electrons in the magnetized target, were carried out by means of computer programs developed at the Polytechnic University of Madrid. The high performance computers Marenostrum4 and Magerit of the Spanish Supercomputing Network were crucial to carry out those simulations and led to a complete, unambiguous and successful interpretation of the experiment.