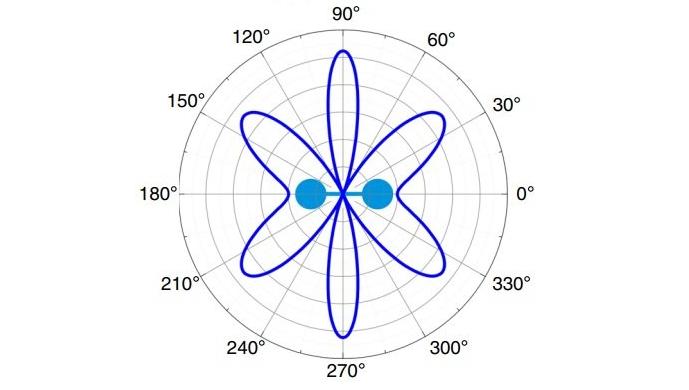 (Via Phys.org) For the first time, physicists have developed a method to visually image the entanglement between electrons. As these correlations play a prominent role in determining a molecule's wave function—which describes the molecule's quantum state—the researchers then used the new method to produce the first images of the square of the two-electron wave function of a hydrogen (H2) molecule.

Although numerous techniques already exist for imaging the individual electrons of atoms and molecules, this is the first method that can directly image the correlations between electrons and allow researchers to explore how the properties of electrons depend on one another.

The results of this study were recently published in Nature Communications by German, Spanish, Russian and Australian researchers, led by Reinhard Dörner of the Goethe-Universität Frankfurt am Main (Germany), and by Fernando Martín, from the Universidad Autónoma de Madrid (UAM) and the IFIMAC and IMDEA-Nanoscience institutes. Fernando Martín has used RES resources since 2006. In this work, the research team has performed some calculations in Cibeles (CCC-UAM) and MareNostrum (BSC) supercomputers.

Only the square of the wave function is observable

The new method involves combining two imaging methods that are already widely used: photoelectron imaging and the coincident detection of reaction fragments. The researchers simultaneously employed both methods by using the first method on one electron to project that electron onto a detector, and using the second method on the other electron to determine how its properties change in response.

The researchers expect that the new approach can be used to image molecules with more than two electrons as well, by detecting the reaction fragments of multiple electrons. The method could also lead to the ability to image correlations between the wave functions of multiple molecules.

"Obviously, the natural step to follow is to try a similar method in more complicated molecules," Martín said. "Most likely, the method will work for small molecules, but it is not clear if it will work in very complex molecules. Not because of limitations in the basic idea, but mainly because of experimental limitations, since coincidence experiments in complex molecules are much more difficult to analyze due to the many nuclear degrees of freedom."