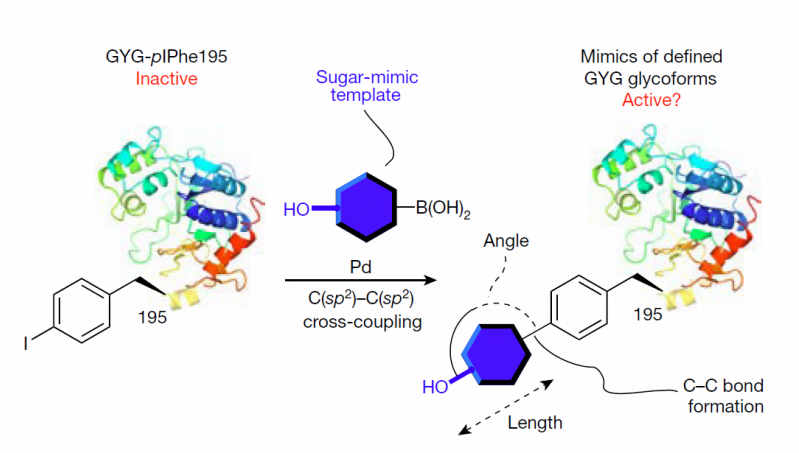 Glycogen is the key energy storage molecule in humans, animals and fungi. It’s where the glucose that fuels us is stored and release from. However, the precise mechanisms by which glycogen is formed at its very start have remained unclear until now. A recent study published in Nature uncovers how the enzyme that initiates glyconeogenesis works at a molecular level. The research was carried out by a team of the Institute of Theoretical and Computational Chemistry of the UB (IQTCUB), user of the Spanish Supercomputing Network, together with research groups of Chemical and Structural Biology of the University of Oxford.

At the heart of the glycogen particle there is a protein that starts the glycogen formation catalysing its own autoglucosylation, that is, decorating itself with glucose molecules. This ‘self-sweetening’ protein – called glycogenin - has been hard to understand since it acts as both catalyst and substrate, so it is changing continuously during the process. As a consequence, it was not possible to access to homogeneous forms of this protein to characterise the process. In this work, researchers have used for the first time the unnatural metal palladium to access directly to the different states of glycogenin.

The experimental work has been performed at the University of Oxford, and the first principles modelling has been performed by the group led by Carme Rovira at the IQTCUB, thanks to the computational time granted in MareNostrum (at Barcelona Supercomputing Center) through the RES calls. The results obtained reveal a surprisingly tolerant but precise process to glycogen’s creation and growth. The new method used in this works allows to “jump” directly into the intermediate states of glycogening through chemical control and could be a powerful tool in the study of enzymes mechanism.

Picture: Palladium-mediated C–C ligation as a strategy for mechanistic investigation of glycogenin