An engineered enzyme to synthesize carbohydrates 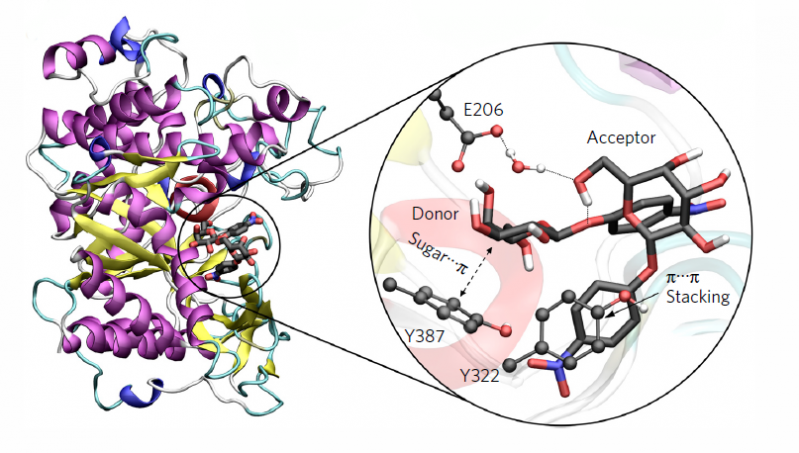 (Via Universitat de Barcelona). Sugar or carbohydrate synthesis is important for the development of diagnostic tests, vaccines and new drugs. In a study co-led by a team of the Department of Inorganic and Organic Chemistry and the Institute of Theoretical and Computational Chemistry of the UB (IQTCUB), together with a research group of biological chemistry of the University of Oxford, have synthetized carbohydrates with enzymes through a reaction that was not much studied so far on these biomolecules and which creates few by-products.

The study, published in the journal Nature Chemical Biology, has been led by the researcher Carme Rovira, ICREA researcher from the Department of Inorganic and Organic Chemistry of the UB, and Benjamin G. Davis, from the University of Oxford. The study also has the participation of Javier Iglesias-Fernández, researcher in training at the UB and first author of the study.

The research group led by Carme Rovira (Quantum Simulation of Biological Processes) is user of the Spanish Supercomputing Network since 2006. In this work, the supercomputer MareNostrum (from Barcelona Supercomputing Center, BSC-CNS) was used to create multi-scale molecular dynamics simulations to elucidate the precise mechanism of the transglycosylation reaction studied.

Sugar or carbohydrate synthesis in the laboratory (conventional chemical synthesis) is usually expensive and requires a lot of work; therefore lots of efforts have been made over the last years to do so with enzymes, which are natural catalysers. However, the enzymes that synthetize sugar (called glycosyltransferases) are hard to manipulate. This is an obstacle for the development of potential drugs that could be used to treat numerous diseases related to carbohydrate-active enzymes, such as diabetes or certain types of cancer.

Nowadays the classic idea of carbohydrates being a source of energy has changed. It is known now that carbohydrates play an essential role in many molecular processes in the cell, from detecting pathogenic agents to cellular communication or anti-inflammatory response. Therefore there is a great interest in the design of drugs that copy the structure of carbohydrates, since they would be easily assimilated and recognized by a part of the biological receptor/receiving system.

New enzymes that go from degrading to synthetizing carbohydrates

Now the teams of the University of Barcelona and Oxford have found the way to modify an enzyme (glycosidase) which usually degrades carbohydrates (it catalyses the hydrolysis in glycosidic bonds) so that it acts reversely and synthetises carbohydrates. “Moreover, this synthesis has been reached with a new reaction that had not been observed in glycosidase yet. This is a variation from a reaction called front-face or SNi-like” says Carme Rovira. “The advantage of this reaction in glycosidase –continues the researcher- is that it makes the synthesis in a clean way, without almost causing hydrolysis residues and using economically viable substrates (sugar)”. “Basically, we used our experience with enzymes that synthetize carbohydrates to apply the reaction to one side in other enzymes with more biotechnological possibilities” concluded the researcher. Her team discovered the molecular bases of the one side mechanism in enzymes in 2011.

In the study, the synthesis has been carried out with a specific enzyme, the Sulfolobus solfataricus beta-glycosidase, but it can be applied to other enzymes using a similar engineering method of the active center.

Using enzymes that degrade sugars (glycoside hydrolases), with no problems for their manipulation and which can be conveniently engineered, as seen in this study, represents, thus, a promising alternative to obtain new carbohydrates.